My Name is Stuart

NetNewsWire 6 Out Now on iPhone and iPad

‌The World's Favourite Open Source RSS ReaderTM has been updated to version 6.0 on iPhone and iPad. I don't often write about releases, but this one is significant and it's been almost a year in the making.‌

The headline features of this release are iCloud syncing, Twitter and Reddit integrations, home screen widgets, and support for a host of new syncing services.

iCloud syncing is a game-changing feature if you want to sync your feeds across your Apple devices and don't want to use a third-party syncing service to do so.

You can enable iCloud syncing in the app by going to Settings > Add Account > iCloud. Once enabled, you can either drag feeds from your existing local account or third-party service to iCloud or add feeds directly using Add Feed and selecting the iCloud account.

From there, it behaves like a local account with one small difference: it will sync your feed subscriptions, read and starred statuses across your Apple devices. It's a really cool feature.

A few words to the wise, though. First, if you're going to do a large migration of feeds into iCloud, it does take time. Apple has strict requirements on the amount of data that can be synced and will, on occasion, apply some throttling. (Be patient!) Second, like local accounts, you may miss some articles if they come and go before the app has completed a refresh.

In addition to local syncing, iCloud, Feedbin, and Feedly, 6.0 expands the available syncing services with five new providers: BazQux, Inoreader, NewsBlur, The Old Reader, and FreshRSS. If you use any of these services, now is a great time to jump on board.

Tweets and Reddit posts in an RSS reader? If you're using a local or iCloud account, this is now possible. You can enable Twitter or Reddit via the app's Settings menu under Add Extension.

Once you've signed in, you get additional options in the "+" menu to add Twitter or Reddit feeds:

There are three variations of home screen widgets that follow your Smart Feeds: a Today widget, an Unread widget, and a Starred widget. They come in medium and large sizes. Tapping on articles will take you straight to the article while tapping anywhere else will open the app.

We've not included the widgets on macOS. If you'd like them there, please raise an issue on GitHub.

If You Want to Help Out

NetNewsWire is free, open-source, and built by volunteers around the world. If you want to get involved—and very likely learn a thing or two—head over to Slack. Brent has built a fantastic community, you'll be made to feel welcome!

This update to Singapore Rail:

Singapore Rail 2021.2 is out now, and it’s the first version that supports iOS, iPadOS, and macOS. Three platforms, one codebase: it’s built using the latest version of SwiftUI. 2021.2 is very much version 1 of version 2.

Singapore Rail has a new website and Help Book at singaporerail.app.

Singapore Rail is four firsts for me:

What is Singapore Rail?

In a nutshell: a real-time dashboard of MRT & LRT service status, with push notifications, Siri interactions, a Today Widget, and a fantastic selection of custom app icons.

Singapore Rail features detailed service unavailability information, including affected stations, the affected direction of travel, and whether free public buses or MRT shuttles are in operation.

What about those app icons?

Singapore Rail comes with a fantastic default app icon representing the train used on the newest MRT line, the Thomson-East Coast Line. The initial release also includes an in-app purchase for icons covering trains used on lines introduced from 2003 - 2013: the Circle Line, the Downtown Line, and the North East Line.

Yeah, so, if you really like the app icons (and the app, hopefully), I have launched one t-shirt on Cotton Bureau with the default app icon. 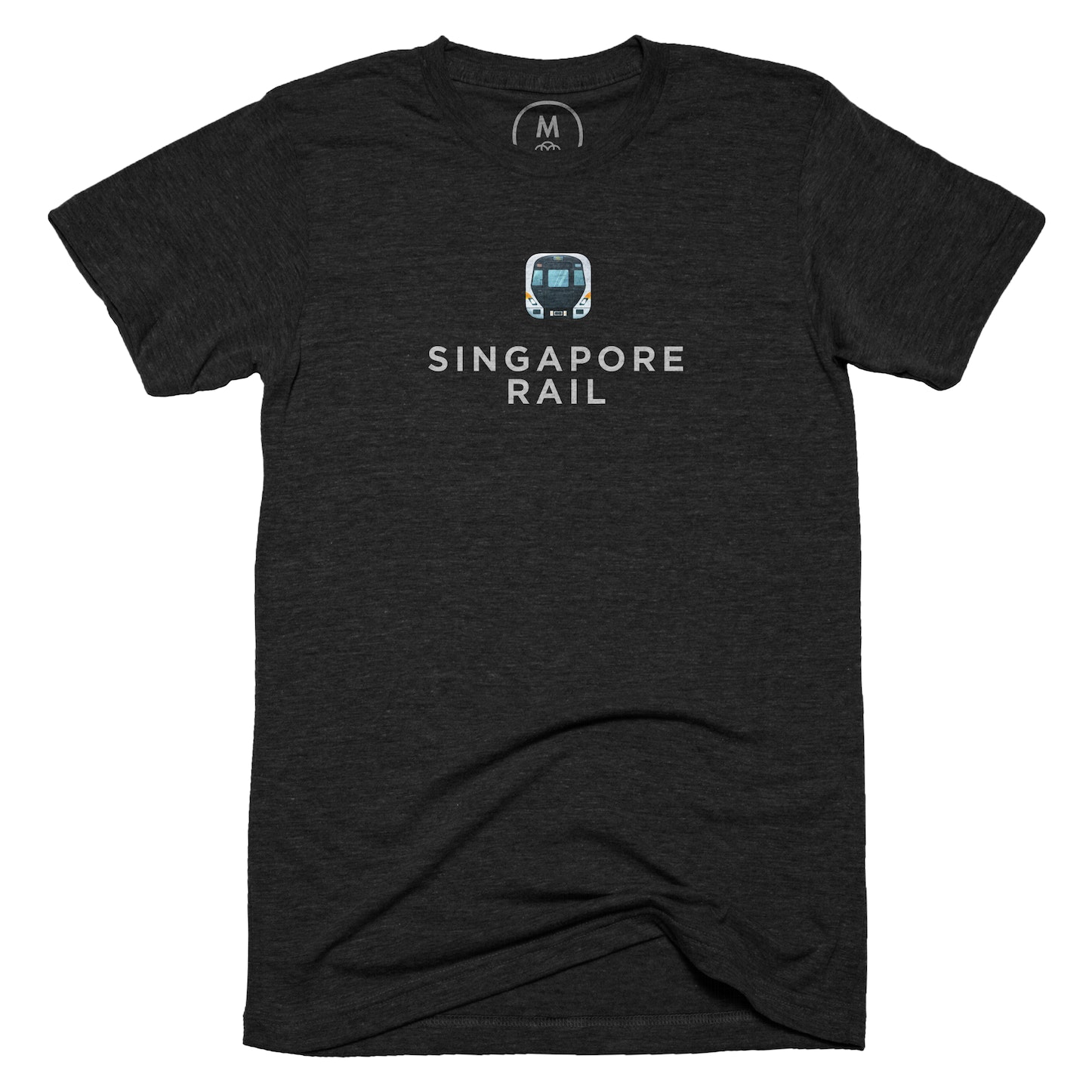 I hope you enjoy the app!

My Magic Keyboard arrived yesterday. I had caught the headlines from some other reviews but kept away from their content as I wanted to form my own opinions. And what better way to establish those opinions than to write this entire review from that keyboard?

What is the Magic Keyboard?

Before the arrival of the Magic Keyboard, I had been trying to work out what its primary function was. Was it a cover, an upgraded Smart Keyboard, or was it a docking station?

I eventually settled on it being a well-designed docking station. I thought it would be heavier—so much so that you'd have to detach the iPad to use it in bed. It would also be more functional—with a trackpad and a second USB-C port to allow other devices to be connected while the iPad charged.

Now that I have one, I'm happy—no, delighted—that I'd come to this conclusion. I think if I'd expected anything else, I would have been disappointed.

The magnets used on the Magic Keyboard are strong. "Super strong", as my son would say. This strength isn't surprising, though. An iPad Pro—in either 11-inch on 12.9-inch sizes—is considerably more substantial than a laptop's top case. Stronger magnets are, therefore, a requirement to keep the iPad stable. And stable it is. While typing, I have noticed no movement of the screen. Even if I shake the coffee table that my iPad Pro is on as I type, the iPad Pro screen shakes less than the screen of my MacBook Pro.

This stability comes at the cost of ease of opening. Unlike the Smart Keyboard, which you could open like a laptop with one hand, the Magic Keyboard requires a bit more oomph. It's a two-handed affair, both to open and then to tilt into the correct viewing position. In my opinion, it's a worthwhile compromise for the stability that it brings.

I am using the British keyboard layout, and, to be honest, on the 11-inch iPad Pro it's a little bit tight and takes some time to adapt. For example, the +, -, [,],', and \ keys are just over half-a-pinkie wide. Part of that is due to the British layout having a taller—and better—Return key. Once you get used to it, it's okay.

Despite the tightness of the layout, there are significant improvements to usability elsewhere.

First, the Magic Keyboard heralds the return of the inverted-T layout of the arrow keys. The removal of the full-heigh arrow keys makes the keyboard that bit more usable.

Second, the keyboard is backlit. It's a great feature when working in low-light conditions.

Third, this keyboard has just the right amount of click. It's not too loud, and it's not too soft; it's just right.

On the 11-inch iPad Pro, the Magic Keyboard’s trackpad is very wide but not that tall. The size and shape are appropriate, though. I've had no accidental touches or clicks while typing.

Another differentiator for the Magic Keyboard's trackpad is that it's not a haptic trackpad. This trackpad goes down when you click it.

Once I got over the minor quibbles with the keyboard layout, I was (and am) typing happily. Very happily. The sound, the tactility, the fact this an iPad keyboard and not a laptop keyboard all adds up to make it astounding.

The stability provided by the magnets is also apparent when typing on your lap. There is no noticeably shake when tapping the keys.

The Magic Keyboard doesn't feel magical; it feels essential. It's a great keyboard.

The trackpad is as much a hardware feature as it is a software feature.

The way that UIKit (and SwiftUI) have adopted mouse support is incredible. For example, I can navigate this document in Ulysses the same way I would if I had typed it up on a laptop. Multitouch trackpad gestures work as you would expect. The cursor makes the experience a little more interesting.

In normal circumstances, it's a circle. When it hovers over a control, it disappears, and the control becomes highlighted and active. When hovering over a text document, it turns to a vertical bar. The changing state of the cursor is well-executed and appropriate for the platform.

I'm also delighted to report that you can configure Tap to Click. Enabling this feature is a personal preference, but I prefer to tap than forcibly click on a trackpad.

I wasn't expecting to like the Magic Keyboard as much I do. Yes, it's heavy. Yes, I have to detach the iPad from the Magic Keyboard before using the iPad in bed or (rarely) for photography. But none of that matters—the whole product is so well designed that it results in a significant step forward for iPad productivity that is simply great to use.

In short, if you want to type on an iPad Pro with first-class trackpad support, this is the best way to do it.