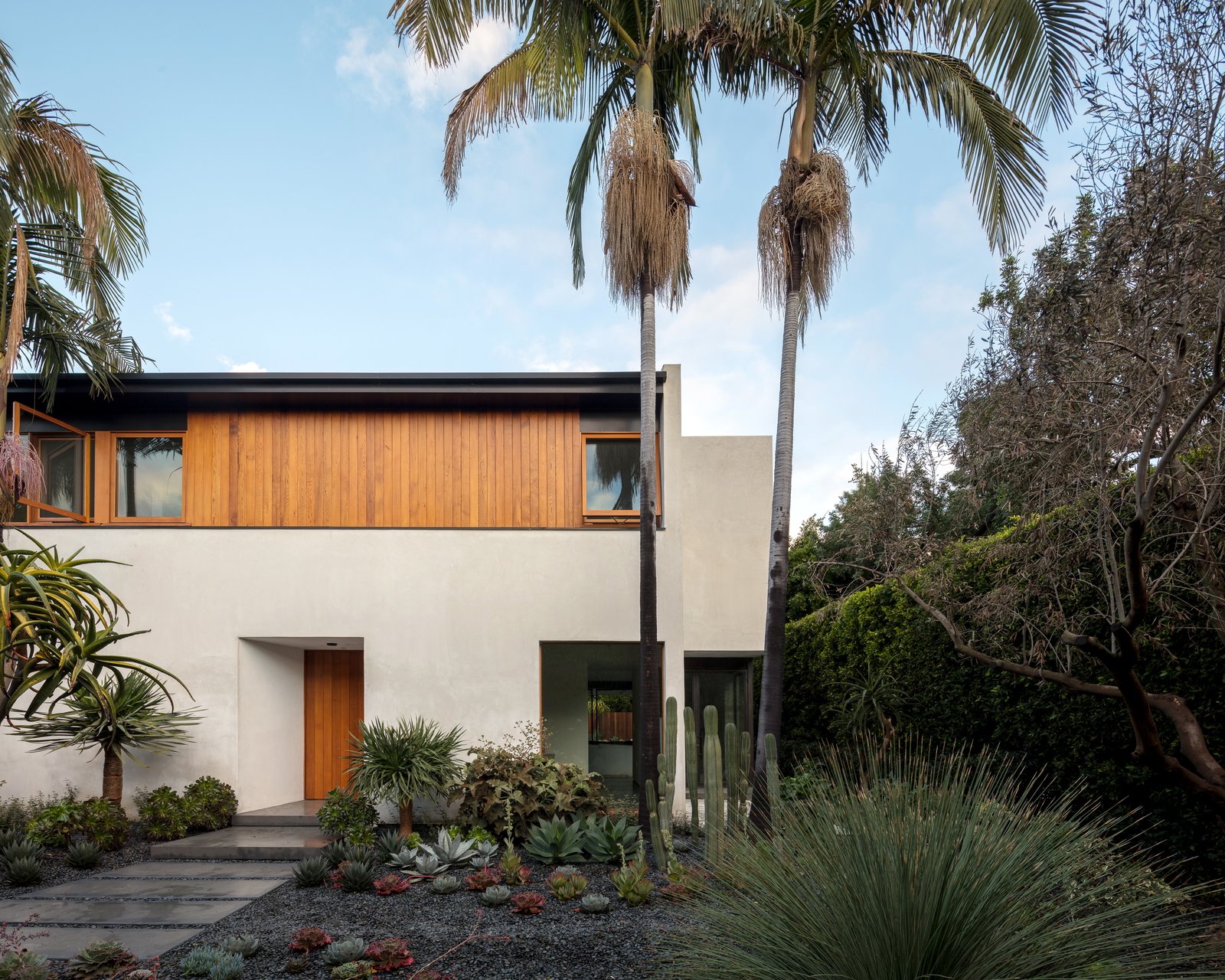 Tucked behind a massive ring of Ficus Nitida in a densely populated Hollywood neighborhood, the Hedge House exploits the privacy afforded by this unique and mature landscape element. A 30 yr-old hedge played a significant role in the decision to purchase the property. Its presence along the property edges offers a high degree of privacy, but also the opportunity to reconsider conventionally visible public spaces (front & side yards) as private garden space. The design of the house is organized around two architectural gestures: a two-story interior lightwell that draws daylight deep into the middle of the house and broad contiguous living spaces that directly connect to the garden. The material language of the house differentiates communal spaces from private spaces: Stucco and cedar are the primary materials and delineate the smaller private spaces of the home. At the back of the house, board-form concrete piers “lift” the stucco volume to produce a porous connection between the open living spaces, the garden and pool. These concrete walls are supported laterally by integrated steel moment frames and infilled with steel pivot doors. The interior spaces of the house are designed around a two-story offset lightwell. At the second floor, this element takes the form of a sunken courtyard and links the spaces of the master bedroom. Light filters through this space into a central stair, drawing daylight into the center of the house. The Ficus hedge establishes a constant reference from within the house. At the ground level, this green wall brackets the space of the gardens and provides an uninterrupted backdrop. From the upper level, the hedge is topped out at the height of the window sills, allowing longer views beyond the property. Power is distributed to the Hedge House by a 14 kW rooftop solar array that supports the main house, the guest house and pool heat. 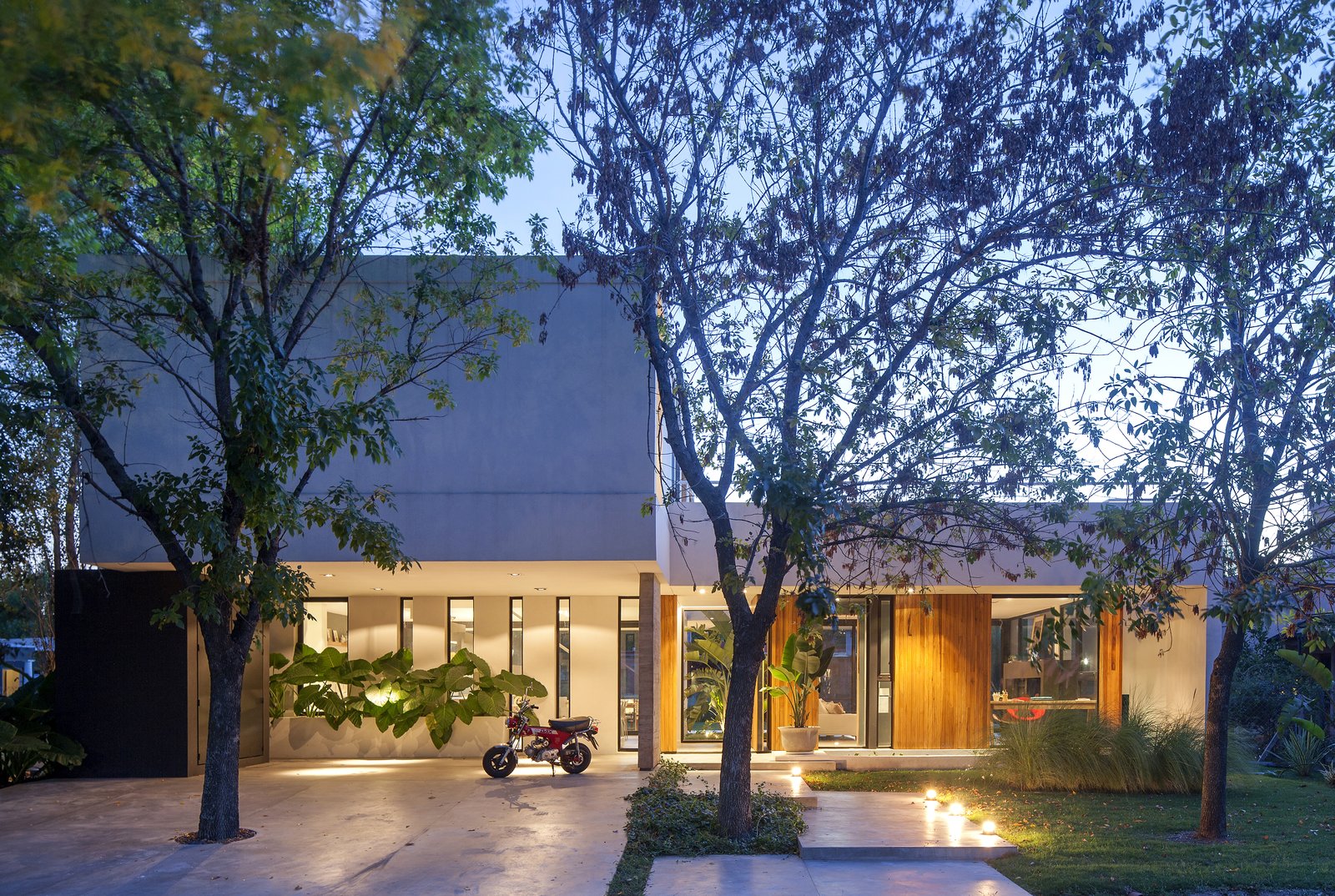 This 250 sq mt house is located in a residential neighbourhood in Tigre, very close to the Delta of Rio de la Plata. The main idea was to incorporate a green area to the interior to articulate the different public areas in this residence: entrance hall, living room, dining room and kitchen. This green lung, though separated by a glass opening, greets us when entering the residence and proposes a different space, a new interior landscape. In tune with this concept, the above mentioned areas are surrounded by a pond containing water plants and fish. With sunlight's dynamic reflections the house opens up to the garden; indoor/outdoor interaction predominates. Due to the dilemma of a large program in a reduced area, spaces are articulated fluidly, with shared uses. In the lower floor we will find all the public area: living room, dining room, kitchen, gallery and services oriented to the south. In the upper floor the rooms are located in the front of the house, generating a roofed garage, while the main suite (separated through a double-height and the stairs) have a garden view at the back. The color white is pure and noble, this is why it stands out in the house. It contrasts with the surrounding nature. Some particular areas contain an intended dark grey, as well as the choice for the floors: concrete-like tiles. A wooden "petiribí" (Cordia Trichotoma) siding has been used to cover the volume that conforms the lavatory and the closet in the entrance hall. The wood's texture and color transmits warmth and blends harmonically with the neutral colours of the whole. The volume of the fire-place floats over the pond and has glass in the back to be able to see through the exterior. It was a top priority during the design stage to orient spaces at its best, optimising natural resources, contemplating the sun's path as an activator and life giver to the interior spaces of the residence, which allows it to be sustainable and efficiently lower the use of electricity. In this case we've used aluminium openings with double glass (DVH), and double wall with air chamber. The partially covered areas, such as the gallery (whose length matches the house's width) and the garage, act as transitions in the house and protects the openings and the residence itself from direct sun-ray exposure. In this project interior and exterior relate fluidly, vegetation enters to the interior and generates a new landscape: transition games, light reflections, water sounds, fish, vegetation scents, new visuals... Architecture frames nature and dialogues with her. 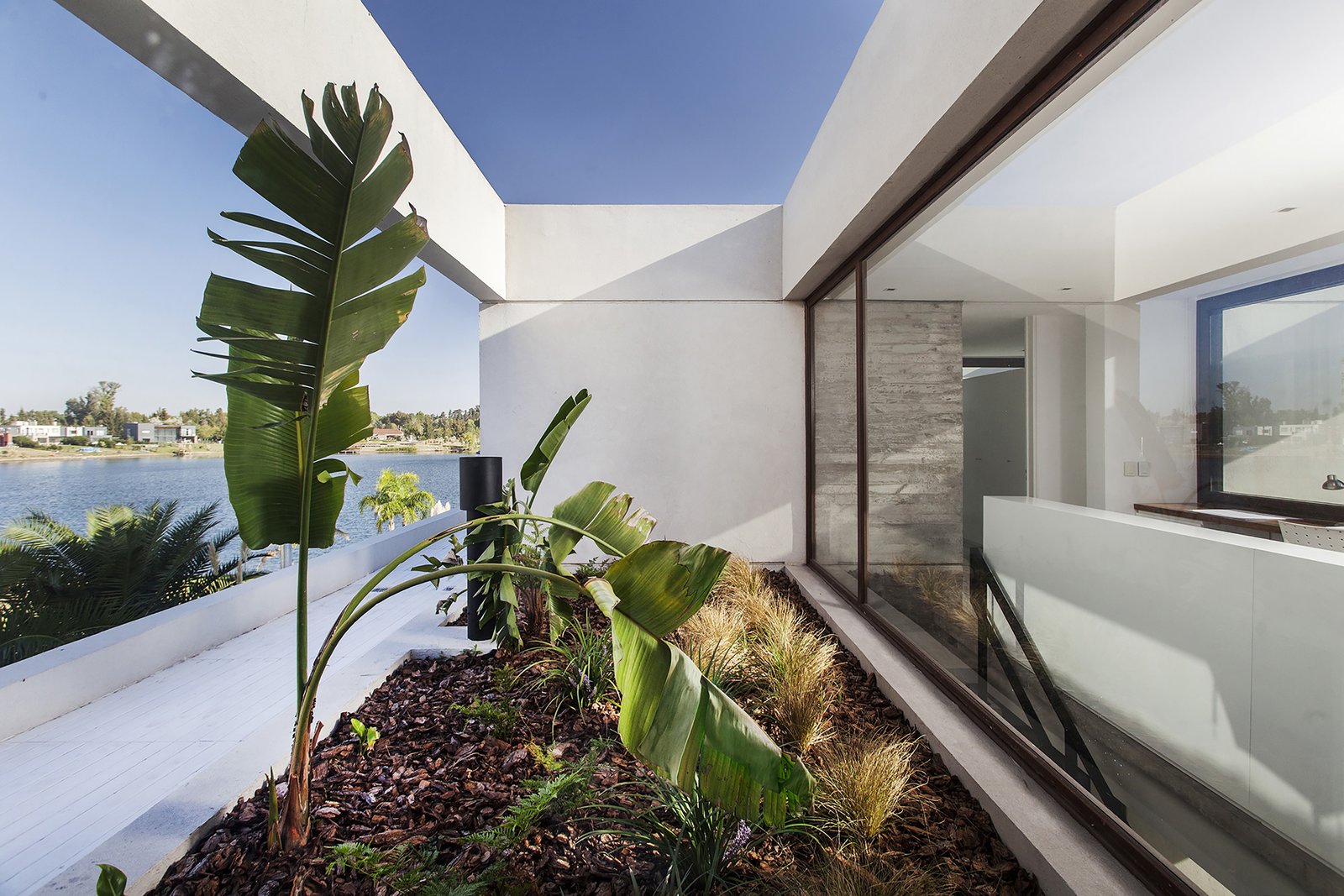 Graffiti House is a single-family house located in the province of Buenos Aires, Argentina. The idea started from a large pure volume with openings, which generate different patios and galleries that act as green bellows, allowing natural light to enter the interior of the house. Priority was given to obtaining a fluid exterior-interior relationship where architecture frames nature and dialogues with it. It is developed on two floors, seeking at all times to obtain views of the lagoon from the different romos of the house. Context Located in the Santa Teresa neighborhood, Tigre, the house has an introverted relationship towards the street, with a blind front made up of a large sheet metal wall, since it was sought that the opening and the relationship with the environment be towards the lagoon, the sound of water and contact with nature. Materials A traditional construction system of double masonry walls with an air chamber, concrete slabs and suspended ceiling was used. The openings are PVC with DVH, to protect the interior from the environment and moderate temperatures, since the house is in constant connection with the outside. On the main facade you can see the large 12mm sheet iron wall, which was left out in the open to rust, and then painted with a colorless sealer to stop the process. This panel gave weight to the ground floor and allowed the house to be separated from the street, and then opened onto the lagoon. Athermic cementitious decks were arranged on the balcony of the main suite and around the sink, repeating the visual pattern of wooden slats. The planter with interior vegetation were made during the work and are connected to an external rain gutter to have drainage. The concrete pergola protects the windows of the master suite from the impact of the sun. Bonds The bonds between the house with nature and the lagoon was prioritized, being one of the most important issues of the project. We study how to relate directly to the environment from patios and galleries of different scales and functions. Starting with the access patio, which leads us to immerse ourselves in the green and then access the house. Upon entering we find the central patio which is surrounded by vegetation, configured by green walls, allows articulating the house generating visuals towards the lagoon from the rooms. A last patio configures the arrival of the upper floor staircase and circulation. 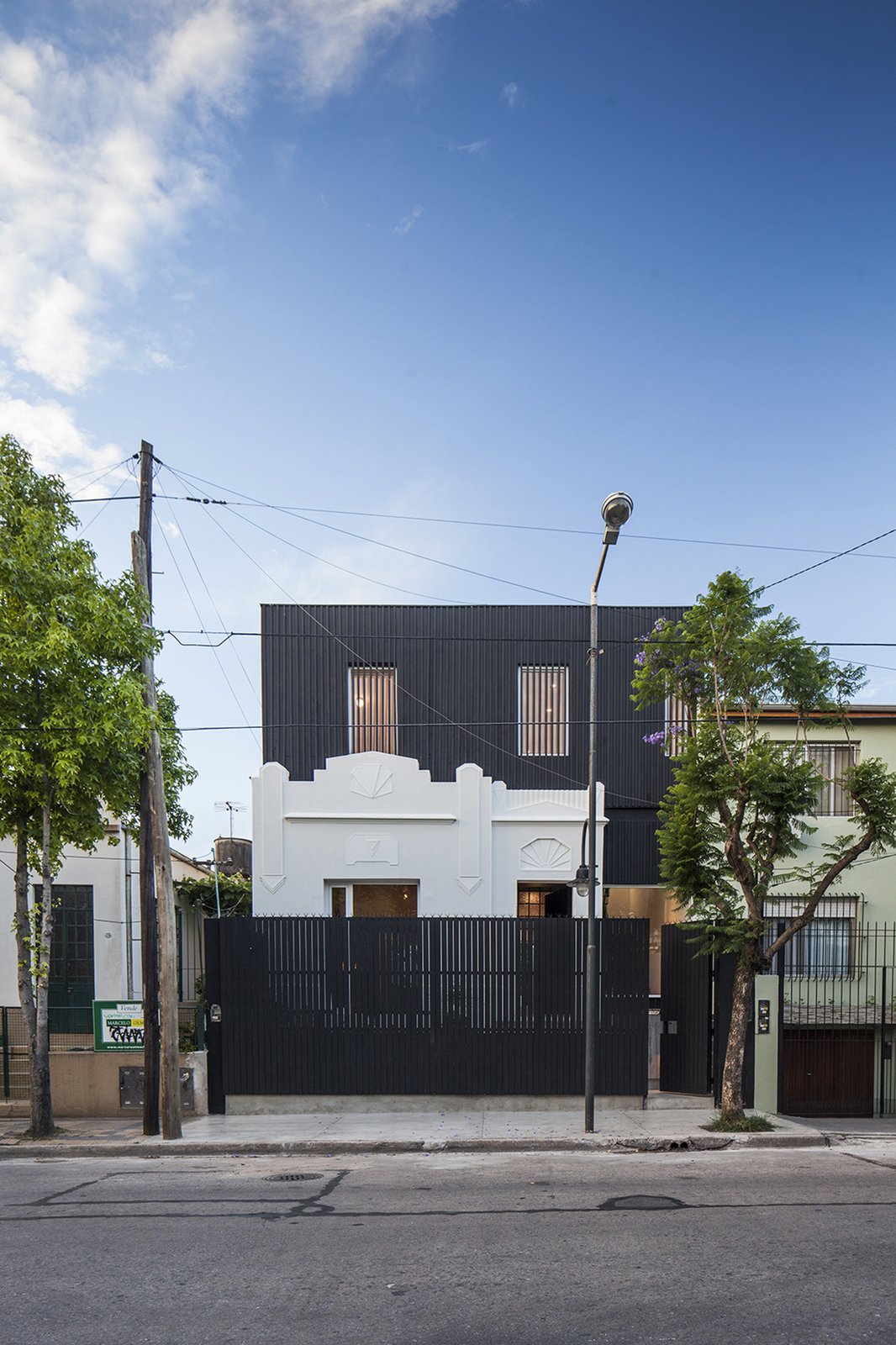 Icon Casa Nido is a single-family dwelling located in the province of Buenos Aires, city of San Fernando, a mile away from Rio de la Plata. The entire project was centered upon the premise to respect the Art Deco style of the existing house and to use a light structure over the new building. The different spaces were designed in two floors, based on the possibilities and opportunities that the old building offered and always capturing the best orientation, not only horizontally but also overhead. Context Located in a neighborhood scale context, it is set up and abides by local regulations. It has an introverted relationship with the street which benefits from the exclusive use of an access patio that coexists directly with the living-dining room, merging with the garden through a circulation that directly articulates the front and the back generating cross ventilation. Material The structure of the dwelling is based on noble materials, but, overall, it was decided to work with a dry, light and fast constructive system. The entire structure was presented in the existing volume, the plaster of the party walls was removed leaving the exposed brick, maintaining the same concept with the roof and leaving the structural vault. The interior endings and enclosures, including the main door, were worked in black iron, continuing with the manufacturing line. The PVC openings, with hermetically sealed double glazing, were meant to take care of the interiors. The new volume, entirely made in dry Balloonframe, implanted as a nest on the existing building, with a materiality opposite to the old house but totally complementary generating a dialogue between the old and the modern. Relation The relation of the dwelling with the outside is one of the main priorities of the project. We studied the way to relate directly with the environment, generating spotlights and light sensors in both spatial directions, horizontal and an overhead direction. System We always work with a routing system where as one moves forward, can discover different situations. When entering the access courtyard, one has a first approach to the front, where the coexistence of both systems can be clearly read. Once inside the house, we generated a first contact with another green space under the light staircase, which sews both instances, and a few feet away, the garden view. The house is a bellows that dialogues between the front and the back. Investigation The biggest challenge that we faced in designing and building this house was to work with an atypical construction system for the area and to enhance and take care of the old building. We always prioritize the orientation, for the efficient use of energy, both in winter and summer, the flexibility of the environments, the fusion with the open air, and the use of regional and noble materials, together with simple and synthetic details.